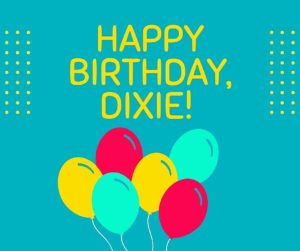 I’ve been thinking about the nature and importance of friendship a bit lately. I recently started reading (the so far excellent) Why Can’t We Be Friends? by Aimee Byrd. It’s a challenging look at the goodness of male-female friendships.

I woke this morning remembering that it is our church secretary’s birthday. Dixie has been in our church since she was a college student in the mid-1970’s. She’s worked in our office for over 19 years. She’s invested in our church and in my family. I wanted to honor her with a personal note expressing what I appreciate about her.

I summarized what I appreciate about Dixie in that card. But I want to expand on a few of those things here. I want to give a public tribute to someone who has been a great friend and servant “behind the scenes.”

Here’s what makes Dixie such a great friend:

She cares about me. The other day, as I walked in the office, she said, “Hey, we haven’t had a ‘third-hour conversation’ in a while. Can we catch up?” (“Third-hour conversations” refers to the significant discussions after the small-talk and surface items.) We often have honest, vulnerable talks about the things we’re dealing with—both good and bad. She had three or four she wanted to check in on.

She respects my privacy and honors confidentiality. Some of the things we talk about are public (I’m preparing to teach at a workshop). Some of the things, however, are private or personal. I share with her because I trust her. As she asked about one thing, she commented, “I haven’t mentioned it to anyone, not even my husband.” She doesn’t keep things from her husband that he needs to know; I wouldn’t expect her to. But that comment builds and earns my trust. A true friend respects what you share, respects your story, and lets you decide who to divulge it to. I’m never scared to share my fears, anxieties, hopes, and joys with her, because I know she’s trustworthy.

She cautions me. I can’t recall a time where she’s had to rebuke me. But, she’s cautioned me away from fear, anxiety, discouragement, anger, resentment, bitterness. She knows what it means to be human, and she encourages me to trust in Jesus.

She questions and disagrees with me. There have been times where she’s not understood my actions, leadership, or teaching. It’s not uncommon to hear her say, “Can I ask you about something you said on Sunday? I’m not sure I understand.” She’s said, “I understand it this way…” That’s a sign of true friendship. She’s not knit-picky or argumentative. She’s honest. I never have to guess where I stand with her.

She encourages me. Dixie is intentional to tell me what she appreciates about me, my family, and my ministry. She doesn’t withhold affirmation until I’m perfect. She helps me see what God is doing in me and through me.

She’s competitive. When it comes to board games, be forewarned. She plays to win, no holds barred. You might lose a limb.

She speaks the truth. Dixie tells the truth. I’ve never once questioned whether she’s truthful. But her truth-telling goes beyond not lying. She speaks Scripture. She understands that while her words are important, God’s words are more important. She recites (from memory) a verse apt for the situation I am in.

She buys me candy. She has to notice in the morning that my stress-induced raids on her candy dish diminished the supply. But she always refills it. (And she knows my favorite candies!)

She shows me grace and mercy. After three and a half years here, she’s seen many sides of me. She’s seen my sin, lose my temper, and act in impatience. She’s received my confessions and offered forgiveness. She’s seen me cry. She’s seen me anxious, depressed, discouraged, and exhausted. She doesn’t tell me to “get over it.” She doesn’t ignore it. She’s patient, kind, gentle, truthful—and, most of all, she points me to the Gospel.

She is loyal. Dixie has seen our church go through many transitions and changes in her long tenure here. Some of those have not been all that easy. But I’ve watched her continue to love and respect the leadership. I’ve watched her greet new people, form new friendships, and continue to serve. She’s in my small group—and she’s been a beloved grandmother to many of those children.

She shares Jesus. Dixie looks for opportunities to share about Jesus with people, but not in a weird way. She treats people as people—not as projects. She builds friendships and serves people in our neighborhood. She talks to kids about Jesus.

She trusts Jesus. Dixie isn’t perfect. She doesn’t claim to be. She knows that she’s a finite, fallen, and frail human. She looks to Jesus for her strength, her forgiveness, and her redemption. She finds her identity as a child of God through faith in the crucified and risen savior.

As I started to write that card, I realized that I don’t have many friends in the world of whom all those things are so consistently true. It occurred to me then that she is one of my best friends in our church.

That’s a weird thing to say for a few reasons.

First, there have been those who argue that pastors should not have friends in their church. (That’s not such a popular mindset anymore).

Second, there’s a slight age gap between us. She’s younger than my mother—but, technically, she could be my mother. In a world where generations often prefer their own—particularly in the church—it is refreshing to have a good friend from another generation, with a different perspective and set of experiences.

Perhaps most significantly, Dixie is a woman. When I was in seminary, I recall leaders telling us that we should never be alone with a woman. One professor boldly stated that he would not give a ride home to a 95-year-old woman. We were encouraged to adopt what is known as “The Billy Graham Rule”—to abstain from traveling, meeting, or dining alone with any woman other our wife. I don’t abide by the Billy Graham Rule for many reasons, not the least of which is that Jesus neither followed nor taught it. (But that’s another blog post.)

I break the “Billy Graham Rule” with Dixie every week. That sounds weird to write. But it’s true. We work together in the church office, frequently alone. There’s not much option. But I never notice it. You see, Dixie and I don’t look at each other as snares and temptations, dangers and threats. We’re family—brothers and sisters in Christ, a mother and son in the faith (1 Timothy 5:1-2).

We have a lot of differences that could separate us—time at this church, age, experiences, gender, taste in candy. But we have something in common that supersedes our differences. We are humans, and we are Christians. What we share in common as human beings is far more powerful than any demographic. And what we share in Christ unites us above everything else.

All that to say—I’m thankful to God for giving me Dixie as a friend.

I’m not good about saying these sorts of things to the people closest to me. But my heart was filled with thankfulness this morning, and I thought I’d publicly honor this gift from God.

I don’t know if you’re reading this, Dixie, but if you are: Thanks for being a great friend. I thank God for you.