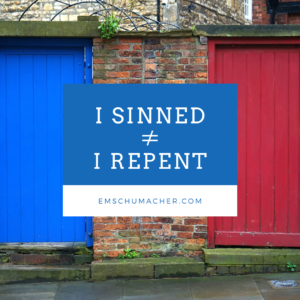 Yesterday, I posted a short meditation on the difference between saying “I’m sorry” and “I sinned.” I emphasized that expressing sorrow over an action is different than admitted a wrong. When we have done wrong, both are necessary. We should feel and express grief over the harm we have done. Likewise, we should own our wrong-doing; we should admit that what we did was actually wrong. Both are necessary, but both are not sufficient. Love calls us to repent. Acknowledging that we have sinned against our neighbor and expressing grief do not equal repentance.

Repentance: More Than a U-Turn

I was taught that repentance is a U-turn. It means forsaking a wrong action, turning around, and heading the other direction. This is all fine and good—that is, so long as it does not involve turning and walking away from the one we harmed. Love demands we stay and repair what we have broken.

A few months ago, in his sermon series on the Gospel of Luke, our pastor taught on the story of Zacchaeus. (You remember him, the wee little man who climbed up in a sycamore tree to see Jesus? Zacchaeus that is—not my pastor.)

When Jesus visited the home of this tax collector (notorious for over-collecting and thus stealing from tax-paying neighbors), the people grumbled. But Zacchaeus stood and said, “Behold, Lord, the half of my goods I give to the poor. And if I have defrauded anyone of anything, I restore it fourfold.”

Jesus affirmed that Zacchaeus’ repentance and faith were genuine, saying, “Today salvation has come to this house, since he also is a son of Abraham.” This sort of commitment and behavior are the fruit of a genuine follower of Jesus.

Zacchaeus’ last sentence caught my attention—”if I have defrauded anyone of anything, I restore it fourfold.” I’ve been meditating on that ever since. Think about those two words—”defrauded” and “restore”—and how they relate.

“Defraud” means to deprive someone through a betrayal of trust. That’s what Zacchaeus did. He demanded a higher payment than owed so that he could keep the difference for himself.

“Restore” means to bring back to the original state.

Zacchaeus says (and Jesus is affirming) that love, when it realizes it has acted in a way that harmed another, will do all it can (even at great cost to itself) to bring the one harmed back to the state it would have been had the harm not occurred. This, I think, is why he commits to restore “fourfold.” The money stolen could have been invested and grown in its value. The one defrauded may have been forced into debt, thus in a far worse state now than they should be in. Zacchaeus is not willing merely to give what he stole in original monetary value; he will exhaust his own wealth to bring them into the state they should have been before he harmed them.

More Than “I’m Sorry I Sinned”

What does this mean when for us when we have sinned, and we are sorry? It means we don’t say, “I’m sorry that I sinned against you” and then walk away. It means we stay and commit to doing everything possible—even at significant cost to ourselves—to reverse the harm we did. That is (so far as possible) we will bring them into the state they would have been in had we not wronged them.

For an abuser, this means not only confessing the evil and expressing genuine remorse, it means paying for therapy and providing any and all services needed to restore the survivor to health.

For a thief, it means restoring what was withheld or taken, plus the value that would have been had it not been taken.

For one who causes division in a family or church, it means working to restore the peace, unity, and flourishing that was destroyed.

Jesus’ affirmation of Zacchaeus’ commitment to restoration demonstrates that confessing our sin against our neighbor does not release us from the obligation to restore our neighbor.

The Gospel and Restoration

A Christian might object: But doesn’t the grace and forgiveness found in the Gospel release us from such debt? I’ll answer that false-thinking in tomorrow’s post (I Repent ≠ I Won’t Help You).