To most Iowans, the name “Merle Hay” is associated only with a mall in Des Moines and the road that passes in front of it, both of which bear his name.

Growing up in Glidden, Iowa, I knew of Merle Hay as our hometown war hero—the first Iowan and one of the first three Americans to die in World War One. Friday, November 3, 2017, marks the one-hundredth anniversary of his death. To honor him and his sacrifice, I’m sharing a new song, “The Ballad of Merle D. Hay.”

Merle David Hay was born July 20, 1896, on a farm near Carrollton in Carroll County, Iowa, the son of Harvey and Carrie Hay and the older brother of Basil and Opal. In 1909, the Hay family moved to a farm east of Glidden and continued to live on various farms around the Glidden community.

Hay worked at the Glidden farm implement and enjoyed his horse and buggy, roller-skating, his pipe, and his mother’s sweet rolls.

Though good-natured, Hay had a knack for mischief. One source recounts an incident in his youth:

[Merle and Basil] had climbed to the farmhouse roof to tack on shingles. The event, however, had turned into a fight between the brothers so Mrs. Hay climbed the roof in an effort to make peace. As she alighted, Merle hastily descended and removed the ladder—leaving his mother atop the house for an hour.

The editor of the Glidden Graphic described Hay as a “kindly helpful spirit.” Two days before Hay departed for the Army, the editor got his car stuck in the mud on the road to Coon Rapids. Merle Hay was the first on the scene, offering assistance and then a ride to his own home to use the phone, eventually driving the stranded party to a mechanic’s garage for help, devoting over an hour of his time and the use of his car, refusing any repayment beyond a thank-you. The editor described Hay’s willingness to help as illustrating the heart that motivated enlistment in the war effort, an “expression of real character and christian helpfulness.”

As the United States entered World War One on April 6, 1917, Hay had avoided the draft due to his age. That spring, the Glidden Graphic printed the following editorial:

Up to the present time, to the best of our knowledge, no young man from Glidden has enlisted. Every town and community will be expected to furnish its share of young men for army and navy service that our enemy across the seas may be brought to terms as speedily as possible. 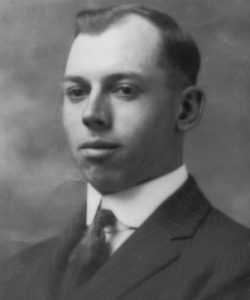 On May 3, 1917, at the age of 20, Hay voluntarily enlisted. When he informed his mother that he had quit his job, she did not approve of the reason and attempted to dissuade him from enlistment. His mother insisted her son have his picture made before he departed. It is the only known photograph of Merle Hay.

Hundreds gathered at the Glidden train depot to see the men off. The Graphic reported:

Several hundred people were at the depot when the 7:24 local train came in, to see the boys off. High school pupils sang ‘America’ and gave the young men some rousing farewell cheers. The occasion was one of solemnity, however, rather than of rejoicing. Mothers cannot easily let their boys go on a mission from which they have no assurance that they will ever return. Tears mingled with cheers as Glidden’s contingent left to make their sacrifice for their country.

The group traveled from Camp Dodge to Fort Logan, CO to receive uniforms and equipment. Hay then went to Fort Bliss, TX to be trained, where he received an assignment to Company F, 2nd battalion, 16th infantry regiment, 1st Infantry Division. Following their training, they traveled to the east coast, and then by ship to France. On June 26, 1917, the 1st Infantry Division found themselves in St Nazaire, France.

In September, he wrote his final letter, closing it: “Good bye all, from your loving son, Merle Hay. Good bye, mother, father and all.”

On November 1, the company was transported to the front, near the French village of Artois.

On November 2, at 10 p.m., they took positions in trenches 500 yards from the German lines and settled in for what they assumed would be a quiet night.

On November 3, around 2:30 a.m., the Germans began an artillery barrage designed to separate the Americans from reinforcements, while they blasted holes in the barbed wire that separated them from the American trenches. 240 German soldiers poured through the openings, engaging the surprised, confused, and inexperienced American soldiers in hand-to-hand combat in the dark. A private reported seeing, by the dim light of flares, Private Merle Hay fighting two Germans with his bayonet.

They found Hay face down in mud, his throat deeply slashed. The cause of death was a sing 9mm gunshot beneath right eye. His watch, a gift from his mother, had stopped at 2:40 a.m.

On November 5, 1917, the three dead soldiers received burial at Bathelemont, France, near the battlefield on which they died. The inscription on the grave marker read: “Here lie the first soldiers of the illustrious Republic of the United States who fell on French soil for justice and liberty.”

That same day, November 5, news of his son’s death first reached Harvey Hay via an unexpected telephone call from an Omaha news reporter. Official notification arrived by telegraph later in the day:

As news of Hay’s death spread through Glidden, a Memorial Service was scheduled for 8 p.m. that evening, though the family would not be present. 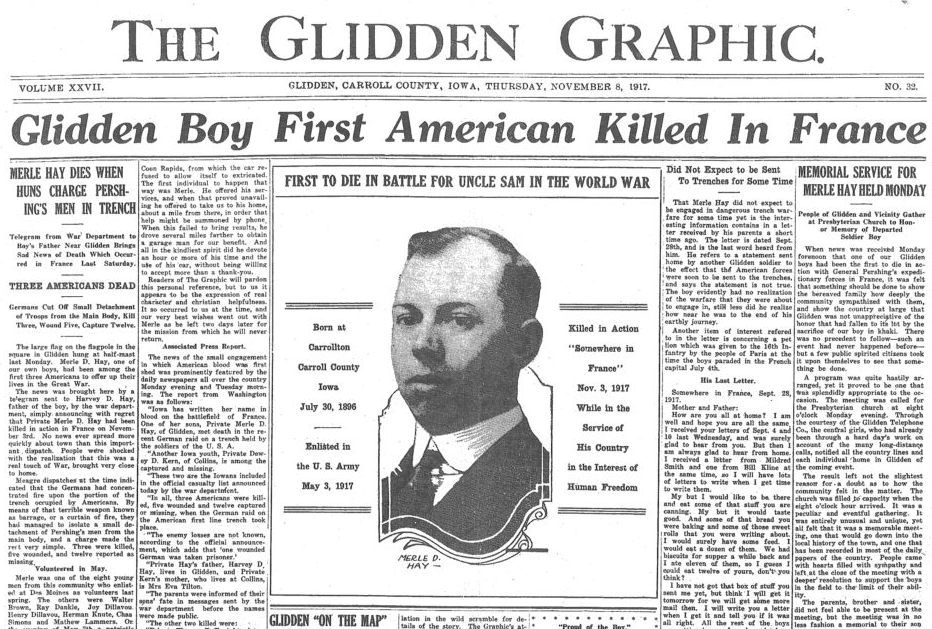 The Glidden Graphic devoted the entire front page of its November 8 edition to news of the town’s loss with the headline “Glidden Boy First American Killed in France.”

The paper quoted Harvey Hay, “If it has been necessary that he lay down his life for his country, I’m proud of the boy. I have another son at home whom I would gladly give up for the same great cause were he old enough. Merle went with my consent and—I’m proud of him”.

The Graphic reported that, though overcome with grief, Carrie Hay said she would rather her son be killed in action than taken captive by the enemy.

He was a faithful soldier, one we could trust. At all times his work was of high quality but especially at the time of his death did he prove his true worth. He stayed at his post of duty and fought to the last. We are proud of the true American spirit shown by him and his comrades.

Merle Hay’s body, along with those of his two fallen comrades, would be returned to the US in the summer of 1921, and then transported to Glidden. 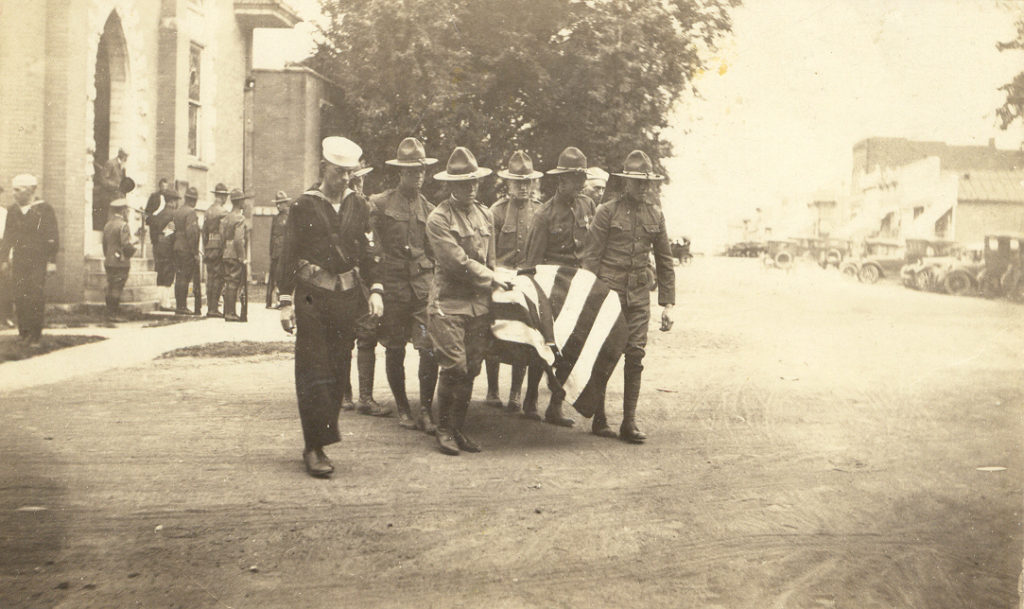 On July 24, 1921, his body lay in state at the American Legion building in Glidden. Before transport to the cemetery, his mother asked for time to remain with her son’s body in private. After 15 minutes, she exited and said, “I have had my last farewell with my little boy.” 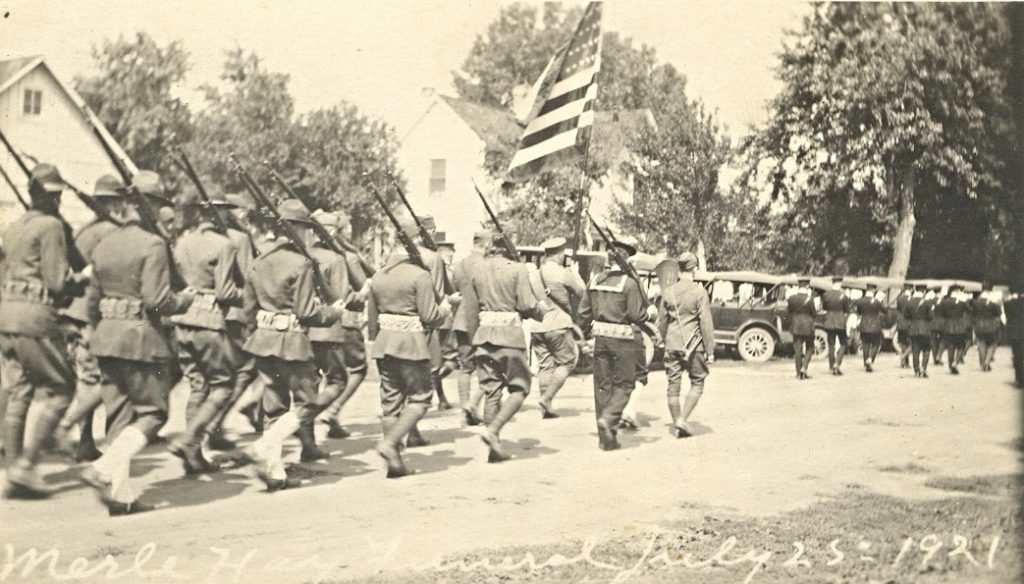 They buried Hay that day at the West Lawn Cemetery in Glidden, Iowa, in what was reported to be the “largest funeral” in Iowa. 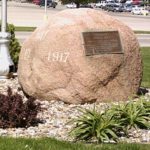 Shortly after his death, the major road to Camp Dodge in Des Moines, the capital of Iowa, was named in his honor. A memorial boulder was placed along Merle Hay Road in 1923.

On May 25, 1930, an eight-foot granite monument, commissioned by the Iowa Legislature, was dedicated at his gravesite with six to ten thousand in attendance. 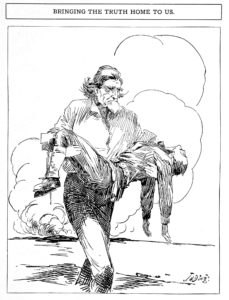 An illustration by Pulitzer Prize-winning newspaper cartoonist Ding Darling is engraved in the front of the monument. The cartoon ran in the November 8, 1917, issue of the Des Moines Register, accompanying an article titled, “Bringing the truth home to us,” which told of Hay’s sacrifice. It depicts a stoic Uncle Sam crossing the waters of the Atlantic Ocean, holding the lifeless body of a young soldier, the first to die in WWI, in his arms.

The monument is visible alongside the historic Lincoln Highway (Highway 30), in what is now the Merle Hay Memorial Cemetery, allowing those who desire to stop, to honor the fallen, and to remember to price of freedom. 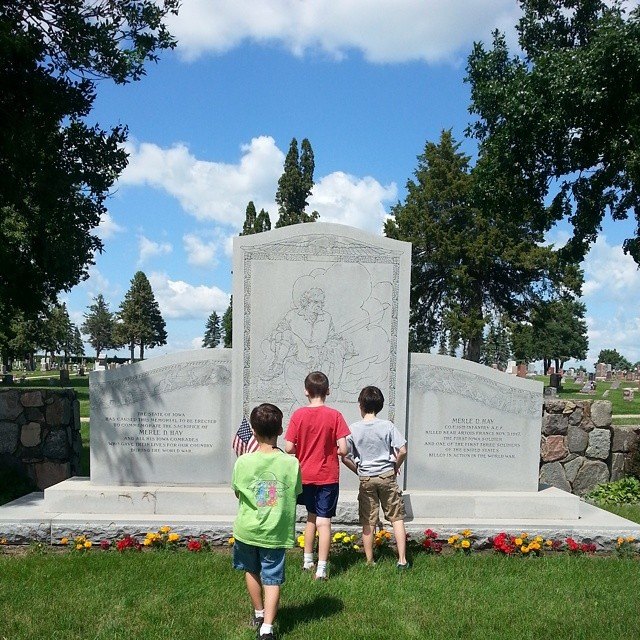