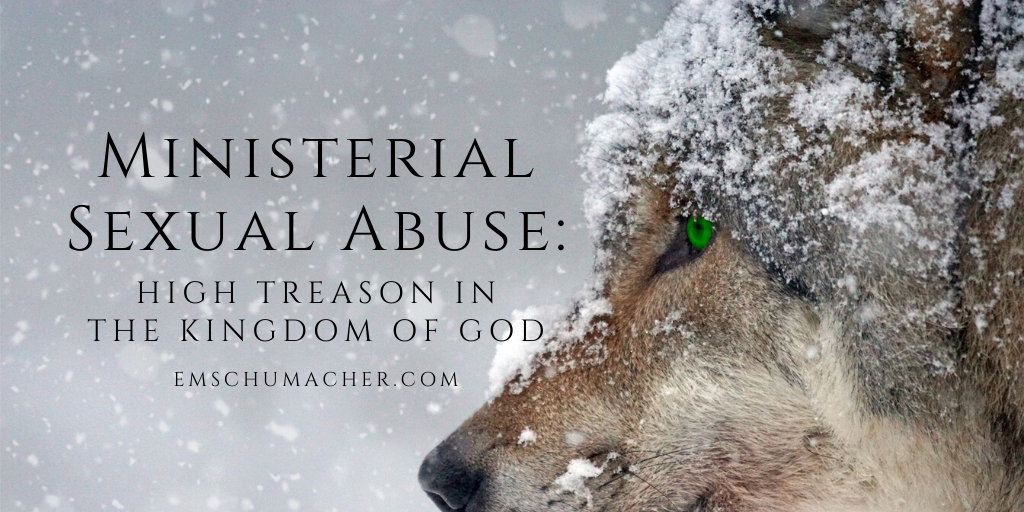 This week, another story broke about a pastor who sexually abused a church member. That sentence seems accurate almost every week. Ministerial sexual abuse in an unfortunate constant in 2019’s headlines.

As each story that breaks, the same responses multiply. Some, understandably, see such abuse as permanently disqualifying. A man who has used the office of pastor to manipulate one under his care for sexual pleasure may never fill the office again. Others question why these reports matter—especially when the abuse took place “so long ago.” Should what a man did as a 22-year-old pastor impact his eligibility to hold the office one, two, or three decades later?

The Nature of Sex

We find the first reference to sex in the Bible in Genesis 2:24: “Therefore a man shall leave his father and his mother and hold fast to his wife, and they shall become one flesh.”

“They shall become one flesh” speaks to the consummation of unity between a husband and wife represented by sexual intercourse. There’s a lot to unpack in that sentence.

“One flesh.” Sexual intercourse represents a unity like no other—two persons have become one flesh. This idea is significant in the storyline of the Bible. In the creation story, men and women were created to rule (subdue and exercise dominion over) the world together. They were not designed to rule over each other, but to rule together. The creation narrative finds its conclusion in an expression of perfect unity between man and woman: “the man and his wife were both naked and were not ashamed.” Here is God’s goal in creation: the image of God (male and female) living and ruling on the earth in perfect, mutually beneficial unity.

Notice how the man is to pursue that unity: “a man shall leave his father and his mother and hold fast to his wife.” In ancient Israelite culture, the man did not move away from his family to marry a bride. Instead, she would leave her home and join him. So what does this text communicate? It pictures a man making sacrifices (leaving what is secure and comfortable) to pursue perfect unity with a woman (his wife)—a unity so good and so safe that neither has reason to ever feel shame (or danger) because of it.

In God’s design, sex is the consummation of a covenant union between a man and a woman in which the man sacrifices his comfort and security to pursue unity with his wife, a unity that never leaves her feeling ashamed or endangered.

That union finds its fulfillment in the relationship between Jesus and his church. The Apostle Paul, speaking of Genesis 2:24, writes, “This mystery is profound, and I am saying that it refers to Christ and the church” (Ephesians 5:32).

In the message of the Gospel, we see Jesus see leave his Father’s side to pursue union with his bride (the church). He sacrifices himself, suffering a humiliating death, to unite her to himself. Those who are united to him will never be ashamed (Romans 9:33; 10:11). The Bible ends with the fulfillment of Genesis 1-2—King Jesus and his Bride ruling the earth together in perfect unity (Revelation 22).

Sex then (as strange as it may sound to say) is designed to be a picture of the Gospel—the safe, shame-free, and mutually-beneficial union of the Bridegroom and his Bride, the culmination of his self-sacrifice to pursue her good.

Given the design for sex to occur in a safe, shame-free, and benevolent environment, it is understandable why sexual abuse can result in significant trauma. Sexual abuse—particularly self-serving sex obtained through the manipulation and exploitation of another—is the misuse of a human being. It is to misuse them physically, emotionally, relationally, and spiritually. Sexual abuse is anti-human.

Moreover, since God designed sex to illustrate the safe, shame-free, benevolent relationship of the Lord and his people, any misuse of sex is a misrepresentation of the person and work of Jesus Christ. Ultimately, sexual abuse is anti-Christ.

The Nature of the Church

I hope to come to you soon, but I am writing these things to you so that, if I delay, you may know how one ought to behave in the household of God, which is the church of the living God, a pillar and buttress of the truth.

The church is “the pillar and buttress of the truth.” Those descriptors depict support and protection. The church is God’s means to hold-up, support, promote, proclaim, defend, and protect “the truth.” And what does Paul mean by “the truth?” He goes on to define it in poetic language:

Great indeed, we confess, is the mystery of godliness:

He was manifested in the flesh,
vindicated by the Spirit,
seen by angels,
proclaimed among the nations,
believed on in the world,
taken up in glory.

Those lines tell the story of the Gospel. Jesus appeared in the flesh—living, suffering, and dying. He was vindicated by the Spirit—raised from the dead and declared the Son of God in power. The crucifixion and resurrection—was witnessed by angels. It was proclaimed to (and believed by) both Jews and Gentiles. And Jesus ascended into heaven, where he reigns at God’s right hand.

This message (which we call “the Gospel”) is the “the church” for which the church is a “pillar and buttress.” The primary assignment of the church on earth is to promote, declare, defend, and protect this precious truth.

The Nature of Church Offices

Church officers—pastors and deacons—are set apart by the local church to equip the church to be a “pillar and buttress” of the Gospel. (I would argue that, by extension, any other position of service in the church—whether “ministry leader” or “nursery worker” or “trustee”—comes with the same purpose.)

Deacons serve to ensure that the practical affairs of the church happen in a way that rightly pictures the Gospel and does not detract from its proclamation. (See Acts 6 for an example.)

In 1 Peter 5, pastors (or “elders”) are forbidden to serve for “shameful gain” (That command certainly excludes illicit sexual pleasures!) They are not allowed to domineer. (That command certainly excludes using power to sexual abuse those in their care.) Instead, pastors should care for the flock in a way that pictures the care of the “chief Pastor,” Jesus Christ, who died for the sheep.

To use a church office (or comparable ministry position) to abuse those under your care, manipulating them for selfish pleasures, is to disrespect the office, oppose the purpose of the church, betray Jesus Christ, and deny the Gospel in deed.

Sexual Abuse in the Church

Combine what we’ve learned about sex (a Gospel-picture) with what we’ve seen about the church (the Gospel-protector). What conclusion should we reach? At the very least, we see this:

When church ministry positions are the setting and means for sexual abuse, the offense is doubly-heinous. Such persons have dared to enter the pillar and buttress of the Gospel as called representatives of the Gospel to use a picture of the Gospel to act in a way that denies that Gospel, serving themselves and devouring others. Such behavior is Kingdom-treason of the highest order.

Such behavior—even one incident decades ago—certainly speaks to the prudence of them serving in that position again. Their previous betrayal of trust and abuse of responsibility is always relevant to future service in a similar field. If we intuitively understand this in the realm of government, high school, and hospitals, how much more should we grasp it in the local church, the earthly outpost of God’s Kingdom?

As we respond to acts of sexual abuse committed by those in ministry positions (whether recent or decades ago), we would do well to soberly consider the full weight the sin against the abused, the church, the office, the watching world, the Gospel, and the Lord. This is no small thing.

“The saying is trustworthy and deserving of full acceptance, that Christ Jesus came into the world to save sinners,” even the worst of them (1 Timothy 1:15). Christ died and rose so that the worst of sinners could be forgiven of their sins and enjoy eternal life with God.

But God’s forgiveness of repentant sinners does not necessitate the restoration-to-office of those who have betrayed that office in such a severe and extreme manner. The cancellation of debt before God does not negate the church’s call to prudence.

The church is called to patient and impartial care as they appoint persons to positions of ministry in the church, realizing that much of the assessment process is observing over a long period of time (1 Timothy 5:21–25):

In the presence of God and of Christ Jesus and of the elect angels I charge you to keep these rules without prejudging, doing nothing from partiality. Do not be hasty in the laying on of hands, nor take part in the sins of others; keep yourself pure. … The sins of some people are conspicuous, going before them to judgment, but the sins of others appear later. So also good works are conspicuous, and even those that are not cannot remain hidden.

Paul commands this prudence before appointing a person to ministry in the church. If that is so, how much more cautious should we be after a person has used their position to serve themselves, destroy others, and take a sledgehammer to the pillar and buttress of the Gospel?