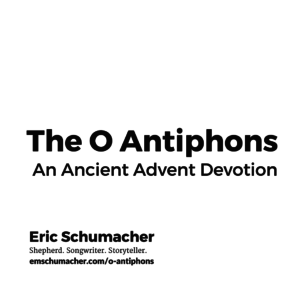 I love Advent songs and Christmas carols. I love the tradition, the nostalgia, the familiarity. Most of all, I love the way a good carol points us to who Jesus Christ came to be and who he is for us today. (I wrote this original Christmas carol for that purpose.)

One of my favorites is “O Come, O Come, Emmanuel.” This carol has its origins in a set of seven Latin antiphons known as “The O Antiphons” or “The Great Antiphons.” The verses may have originated as early as the 6th century. They were used in the Benedictine Abbey, being recited by leaders in descending order before presenting gifts to members of the community. The O Antiphons were shaped into Latin verse in the 12th century.

John Mason Neale translated antiphons 2, 3, 4, 5, and 7 into English for his Mediaeval Hymns (1851), titled “Draw nigh, draw nigh, Emmanuel.” His verses were altered in Hymns Ancient and Modern (1861) Henry Sloane Coffin also translated the verses for Hymns of the Kingdom of God (1916). (The verses in the attached document use Neale’s translation.)

The traditional tune, “VENI EMMANUEL,” is a 15th-century processional, first paired with Neale’s translation in The Hymnal Noted (1854, edited by J.M. Neale and Thomas Helmore).

Each antiphon begins with the letter “O,” followed by a name or attribute of the Messiah as foretold in Old Testament prophecy:

They were used during the last seven days of Advent, December 17-23, at Vespers (evening prayers), with the Christmas celebration beginning on the evening of December 24 (Christmas Eve). These reflections on the promises that Jesus fulfilled build anticipation for celebrating his birth at Christmas.

When the first letter of each antiphon are put together and read backward, they form a Latin acrostic—“ero cras” (I am tomorrow}—reminding us not only of the approaching Christmas Day but also of Christ’s promise to return for his people.

Have You Entered This Month’s Giveaway?

I’d encourage you to incorporate The O Antiphons into your Advent season. Here’s how:

1) Download this devotion sheet and print a copy for each participant. (PDF with Scripture | PDF without Scripture)
2) Read the name of Christ, followed by the accompanying Scripture.
3) Meditate on each name with these questions:*

4) Pray, reading the prayer (left column) aloud together.
6) Sing the verse (right column) together.
7) Rejoice! For the Messiah Jesus has appeared as Wisdom, Lord, Root of Jesse, Key of David, Dayspring, King of the Nations, and God With Us! And he shall return to reign with us forever!

*If you need help thinking through the meaning of these things, here’s audio of a recent Sunday School class at our church in which we meditated on the antiphons (mp3):