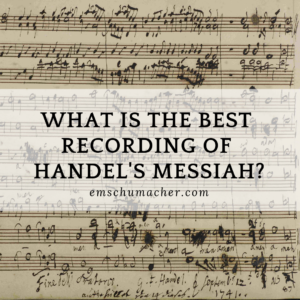 I love Handel’s Messiah. In my opinion, it is one of the best works of biblical theology across all genres of art and literature. I make it an annual tradition to listen to it straight through. I wanted a great version. So, being no music critic, I went searching for the answer to the question: What is the best recording of Handel’s Messiah?

Here’s what I found:

A Music Academy Online survey of the members of the Music Critics Association of North America identified the 1980 recording conducted by Christopher Hogwood (CD | mp3) as their first choice.

Calvin R. Stapert, professor emeritus of music at Calvin College (Grand Rapids, Michigan), where he taught for 38 years, and author of Handel’s Messiah made these recommendations (source):

“My personal favorite is the recording on BIS by the Bach Collegium Japan, directed by Masaaki Suzuki. I must confess that my preference is in part due to the fact that maestro Suzuki is a friend and Christian brother. But the performance by his musicians (mostly Japanese, though you’d never guess it by their diction) would probably be at the top of my list in any case. The Bach Collegium Japan is arguably the best performing group for Baroque music (especially Bach’s) in the world today. (Reviews of their recordings will bear me out.)
“I also like the performances directed by William Christie, John Eliot Gardiner, Christopher Hogwood, and Trevor Pinnock. All these, like the Suzuki performance, are done on period instruments and with historically informed performance practices.
“Obviously I prefer the historically informed performances, but I realize they’re not everybody’s “cup of tea.” Most performances today on modern instruments by professional symphony orchestras and choruses are in varying degrees influenced by historical performance practices and are done with ensembles scaled down to something closer to the size typical in the composer’s own time. Many of these are very good, e.g., the performance directed by Neville Marriner.
“Some will still prefer the performances with huge choirs and 19th-century orchestrations. The recording by Sir Thomas Beecham is a particularly famous one. Although I grew up hearing the Beecham recording, and still have a nostalgic fondness for it, I am convinced that Handel knew exactly what he was doing and needs no modern ‘improvements.’ But if big, romanticized performances draw people to Messiah, more power to them!”

Regardless of your pick, pour some eggnog, sit by the light of the Christmas tree, and listen. Don’t listen as background music or a mere tradition. Listen as Handel wanted you to listen—reflecting on the glorious message of his masterpiece.